Millions of litres of oil recycled from grinding sludge

ZF Friedrichshafen AG is one of the world’s largest automotive suppliers with around 230 locations in about 40 countries. In the two plants in Passau, ZF manufactures around 200,000 axles and transmissions, as well as other drive components, that are used worldwide in agricultural and construction machinery, forklifts, buses and special vehicles, for example. At their Thyrnau site, the employees produce bevel gear sets as well as spur gears, including for the company’s own electric vehicle drives; in total about two million per year.

RUF briquetting systems at ZF: 100,000 hours of reliable operation
Especially in the automotive industry, economic efficiency is one of the decisive success factors, along with innovation, outstanding quality and perfect reliability. With two RUF briquette presses in the Passau Plant 1 and at the Thyrnau site, the group is contributing to this and reducing its environmental impact at the same time: In nine and twelve years of operation respectively and a total of around 100,000 operating hours, the briquetting systems recovered a good 1.5 million litres in Thyrnau and in Passau around 250,000 litres of oil from grinding sludge which accrues during production. These quantities were ultimately saved when purchasing fresh oil. At current prices, this equates to a net purchase value of 2.2 million euros. Additionally, the systems make an important contribution to the conservation of resources. This is because previously a large part of these oil quantities remained in the grinding sludge and was disposed together with it.

Up to 300 tons of grinding sludge per year
In Thyrnau, 35 grinding machines currently produce between 250 and 300 tons of grinding sludge per year. About half of it is made up of steel particles, which ultimately are microscopically fine steel chips, with grinding wheel abrasion and the other half is grinding oil. Until 2006, technicians used their own constructions to press out part of the oil from the sludge. “However, we were nowhere near recovering the large quantities of oil that the RUF press enables”, says Johann Zinöcker, who is in charge of environmental and energy management in the plant.
This advancement in oil recovery was initiated by the RUF sales manager, Andreas Jessberger, who read about the production at the Thyrnau plant in a trade journal in 2006 and subsequently pointed out the potential of the briquetting plants to the plant management. Test pressings at the RUF headquarters in Zaisertshofen convinced the managers in Thyrnau of the benefits and in 2007 a RUF 4/2800/60S had already started operation. The machine is filled by means of forklift trucks, which dump 0.4 cubic meters of grinding sludge from each collecting container into the supply hopper of the press. The system, which is designed for unmanned operation, starts automatically as soon as there is enough material in the feed hopper and also stops automatically when the grinding sludge has been completely processed.
The RUF system, driven by a four kilowatt electric motor, compresses the grinding sludge and presses out most of the oil. What remains are largely de-oiled briquettes consisting of fine metal abrasion and a small amount of residual oil.

Two-stage filtering system automatically purifies the oil
The oil which runs out during the pressing process is collected and purified by means of a two-stage filtering system, which ZF designed in Thyrnau itself. For the plant in Passau, RUF integrated this filter solution directly into the briquetting system. A coarse filter retains elements larger than 160 micrometers. This is followed by a second stage, which also separates particles larger than 40 micrometers. From there, the oil flows into an IBC container, which holds one cubic meter. The full containers now remain motionless for four days, so that any remaining solids are deposited on the bottom. Following this sedimentation phase, ZF pumps out the oil from the top and returns it to the grinding machines without further treatment.
The effort required for operation is minimal. In addition to filling the machine with grinding sludge, employees only replace the IBC containers full with the recycled oil, with empty ones and they cart away the collection containers with the briquettes and regularly replace the filter media. Apart from this, they clean the machine at defined intervals.

Large oil purchase savings – minimal operating costs
About every six weeks the system in the Thyrnau plant receives a new press piston, and once a year a thorough maintenance is due. All work is carried out by the plant's maintenance staff themselves. The piston wear is due to the relatively high selected pressing power. In this specific case, however, it pays off to increase the oil yield with high pressure and therefore change the punch more frequently.
The total cost for maintenance and wear parts have been minimal and consistent ever since the machine was commissioned, twelve years ago. This saves about 1.50 euros per kilo of recovered oil. This is set against 0.18 euros of operating costs for maintenance and wear parts – so around 12% of the achieved savings.

The Thyrnau plant recycles more than 120,000 litres of oil every year
"By pressing with the RUF machine we recover between 100 and 120 tons of oil per year from the grinding sludge", explains Johann Zinöcker. Since the oil has a density of only about 0.85 g/cm3, these masses correspond to a volume of about 120 to 140 cubic meters. In addition to the reduced environmental impact through recycling instead of disposal of the oil, there are great economic benefits. At a current price per kilogram of the oil of just under 1.50 euros net, the press currently generates annual savings of between 150,000 and 175,000 euros. Furthermore, the disposal costs for the briquetted residual grinding sludge are reduced, due to the reduced amount.
After the purchase in 2007, with significantly lower throughputs at that time, the press had a amortisation period of less than half a year. "With today's volumes it would take even less time", Zinöcker sums up and adds: "The press is simple and uncomplicated - if only all machines would run so reliably and economically"
Leo Schauer, Head of Maintenance in the Steel Performance Centre of Plant 1 at the ZF site in Passau, is also completely satisfied with his briquetting press. Inspired by the good experiences with the RUF press that his colleagues at the Thyrnau plant had already had, Schauer pressed ahead with the use of a briquetting press at the Passau plant in 2010. At the start of 2011 the machine, also a RUF type 4/2800/60S, went into operation.
The Passau plant produces less grinding sludge in total. This is why the machine is only in operation in three to four shifts per week. This means that it recovers about 35,000 litres of grinding oil every year, which has added up to a total of 350 cubic meters since it was commissioned in 2011. The amortisation period was therefore about two years, as Leo Schauer recounts.
A somewhat different procedure for the way the oil pressed out of the machine is returned to the production process was established here. Leo Schauer and Alfred Weisheitinger, who is in charge of maintenance, dispensed with the regular sedimentation phase after the two-stage filtration, but take a sample of the recycled oil from each container for examination in the laboratory.
The main reason: A few grinding machines in Passau do not work with oil. The analysis helps to rule out that a batch of emulsion sludge accidentally enters the press and contaminates the oil.
Maintenance and the replacement of wear parts is also carried out by ZF employees themselves in Plant 1 in Passau. “Every two years we order a spare parts package from RUF and then install the parts ourselves depending on the their wear”, Leo Schauer explains.
The bottom line, Schauer summarises, is that “the machine is a sure-fire success”. At the site in Passau the press runs three to four days per week for eight hours each. At the Thyrnau plant, on the other hand, the press even runs 24 hours a day, five to six days a week. And it does this extremely reliably – “We have not experienced any serious disruptions since commissioning," Johann Zinöcker reports.

„ (...) we have not experienced any serious disruptions since commissioning.“ 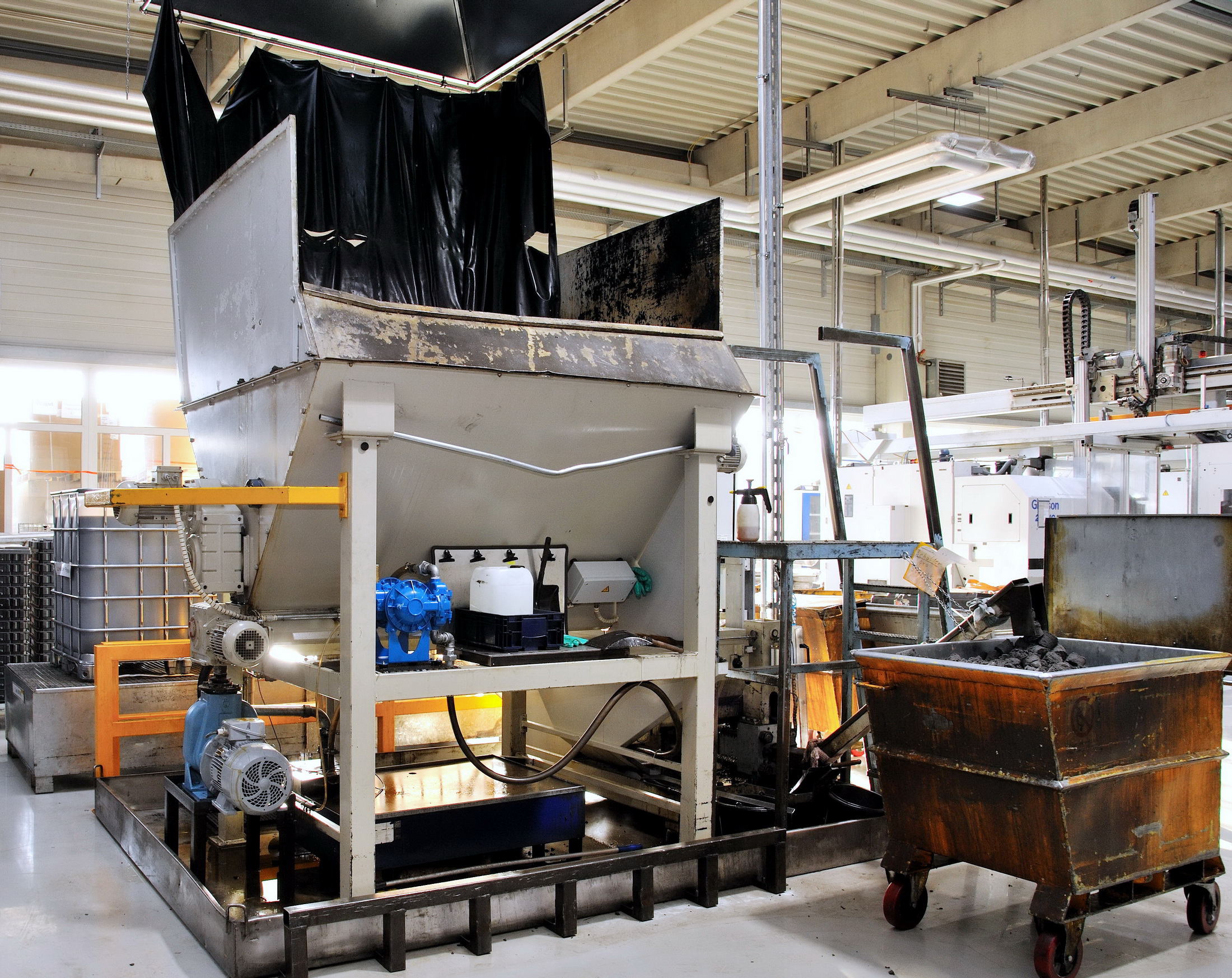 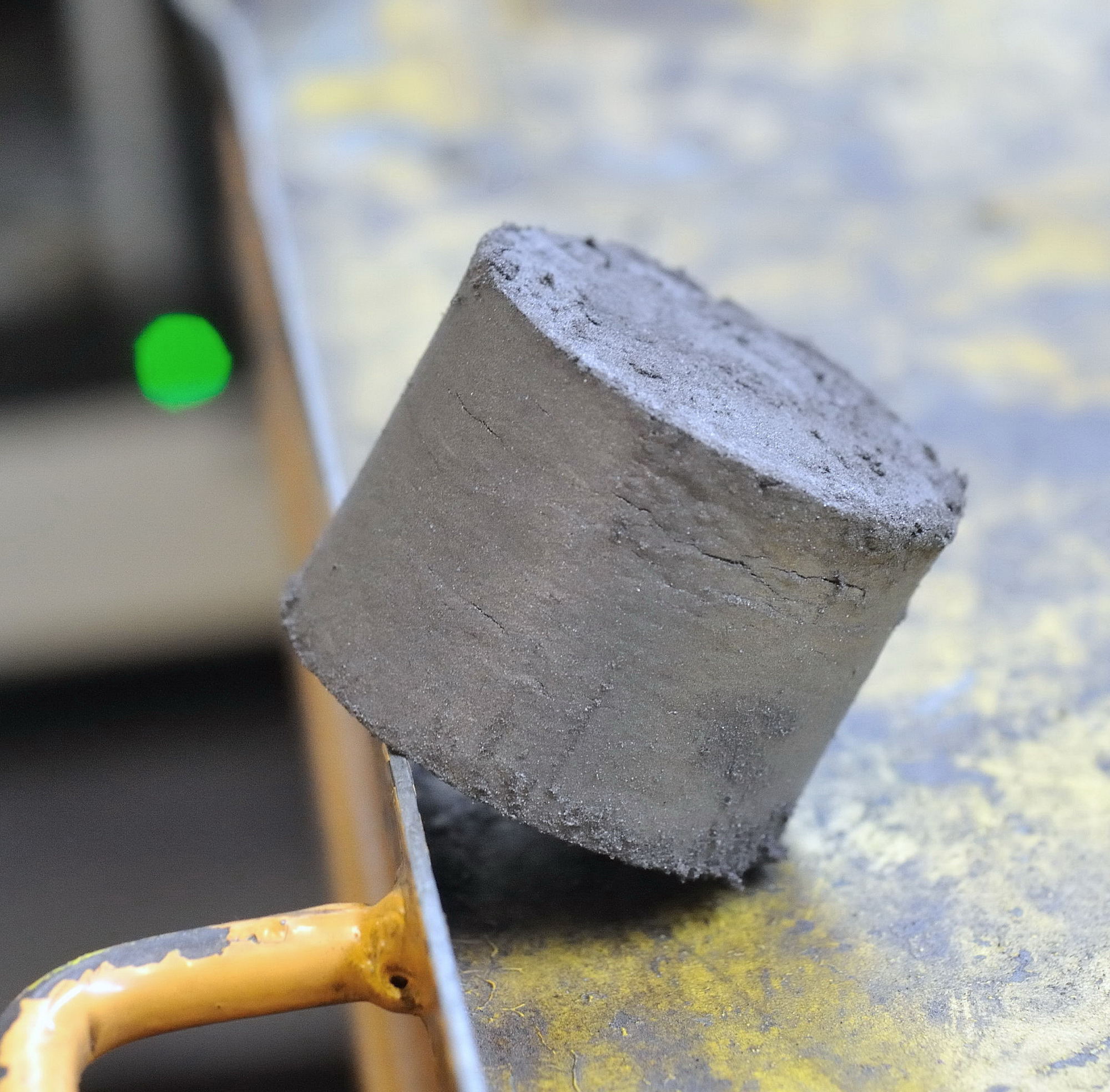 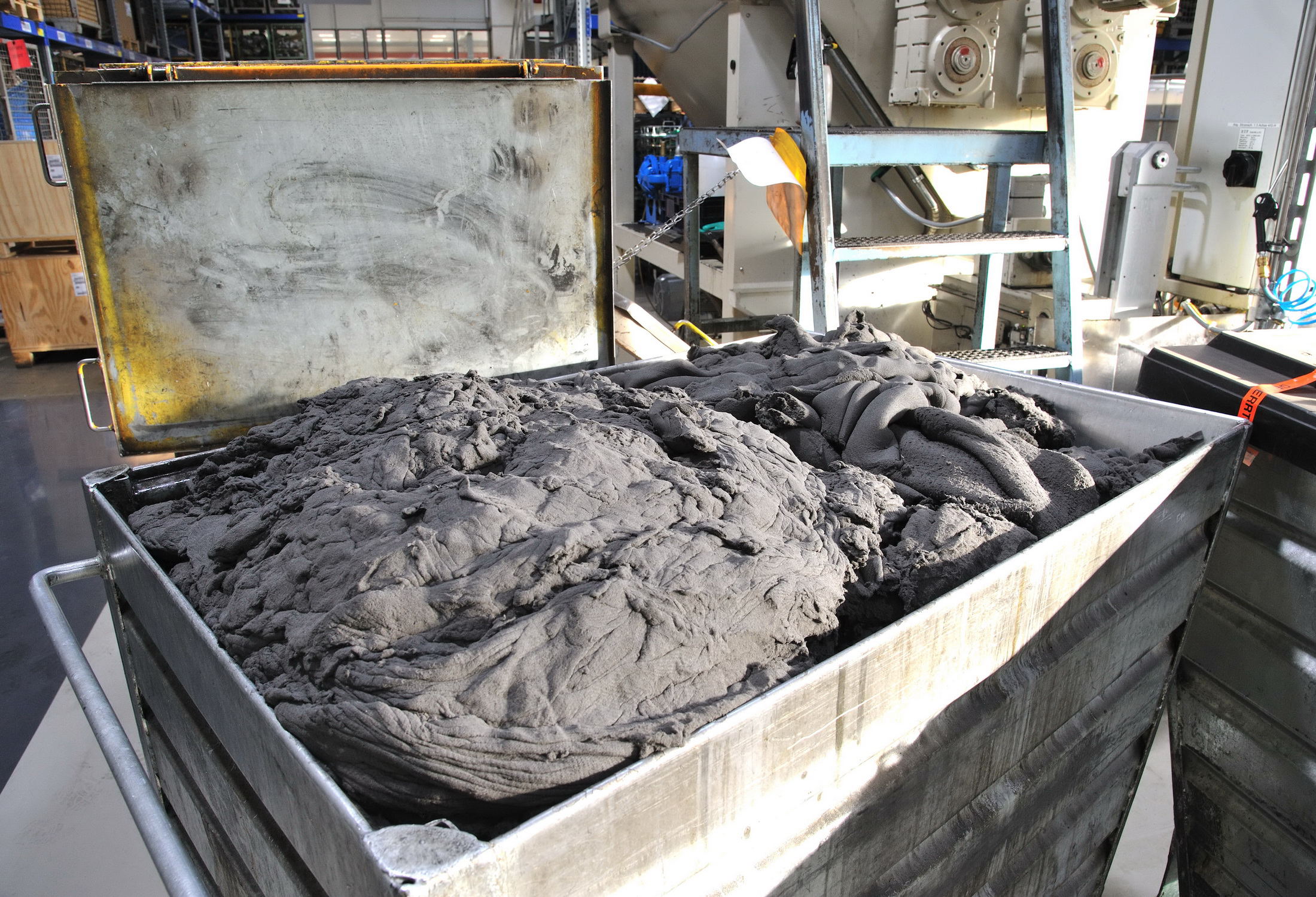 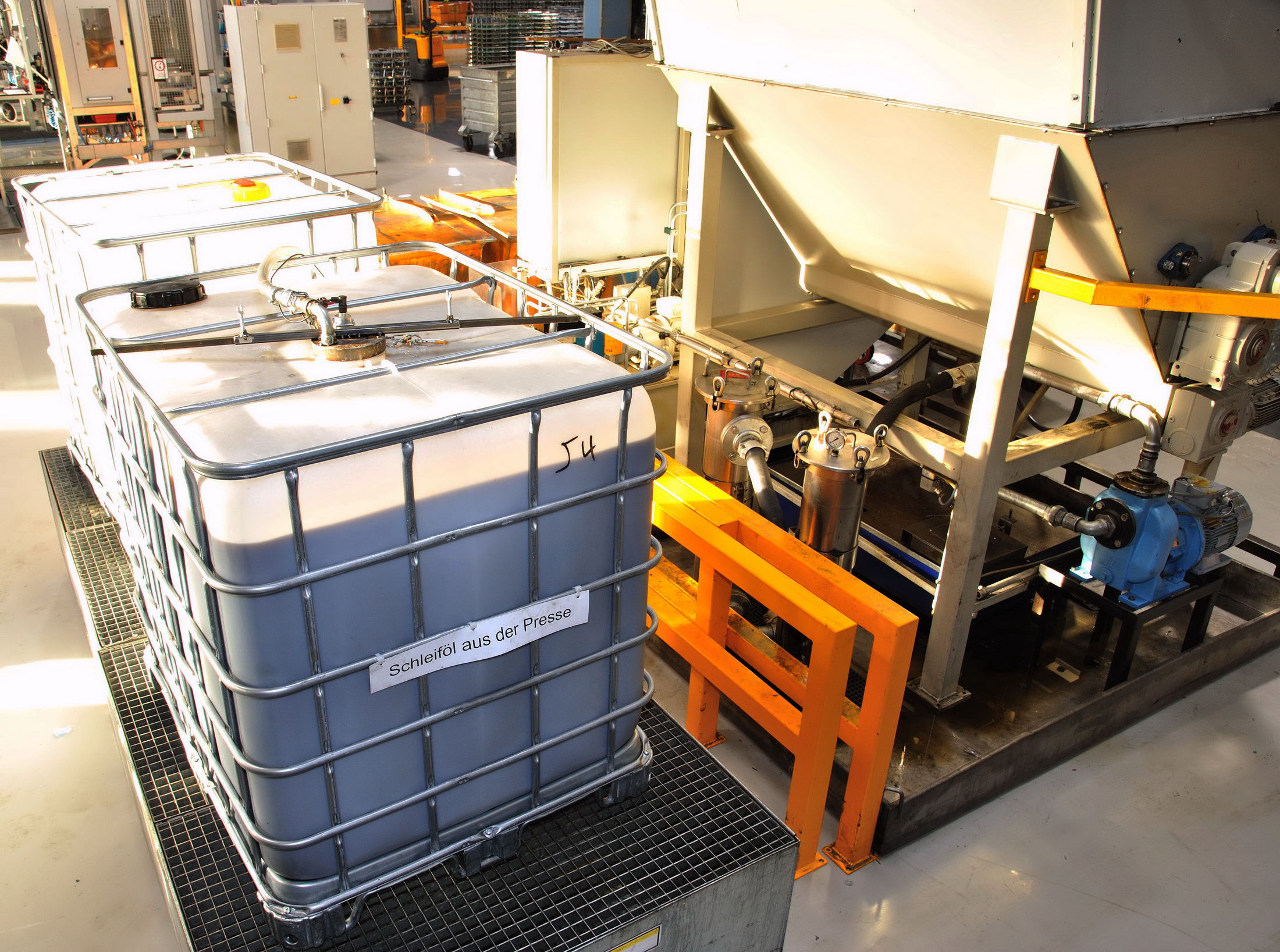 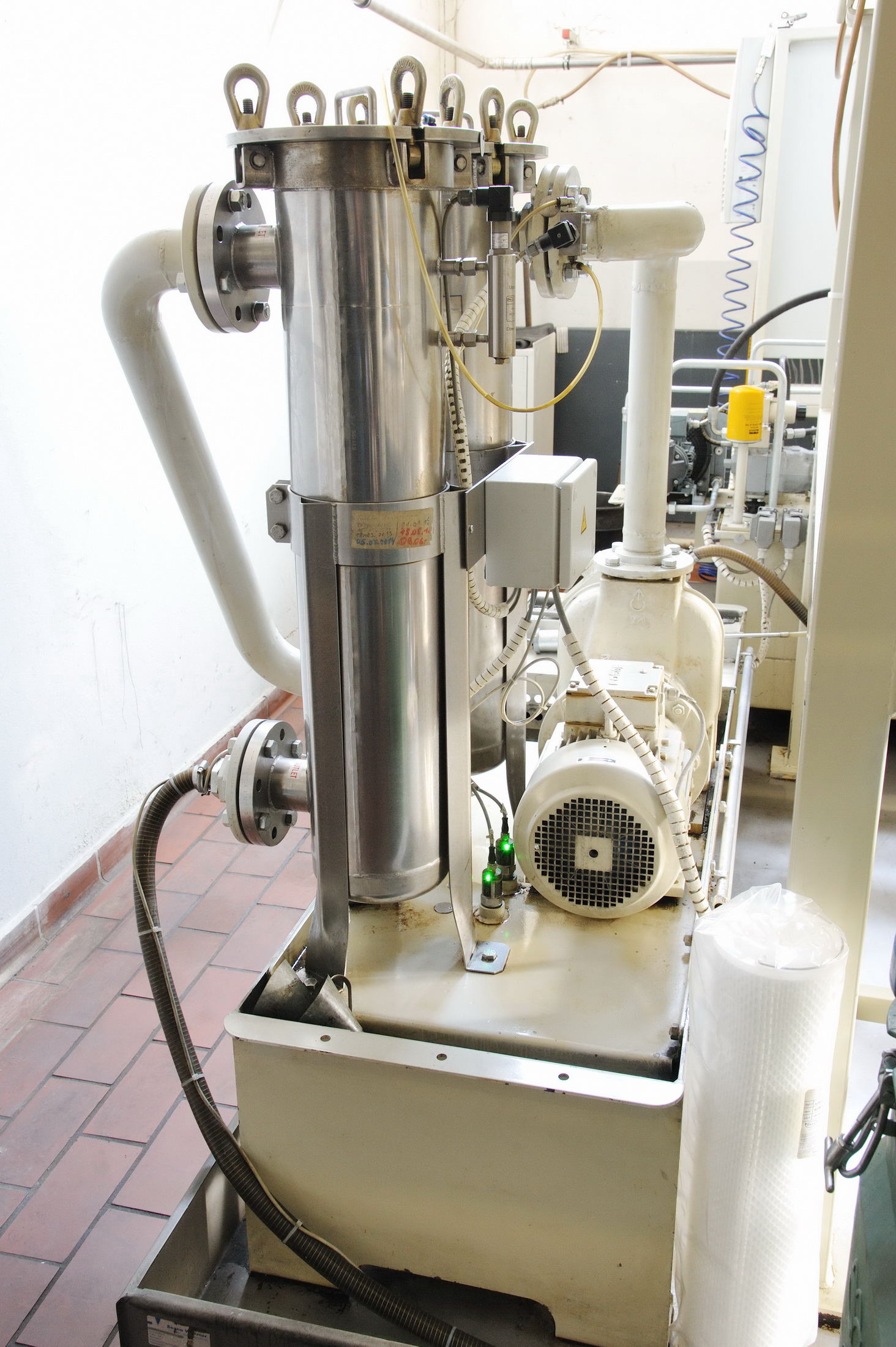 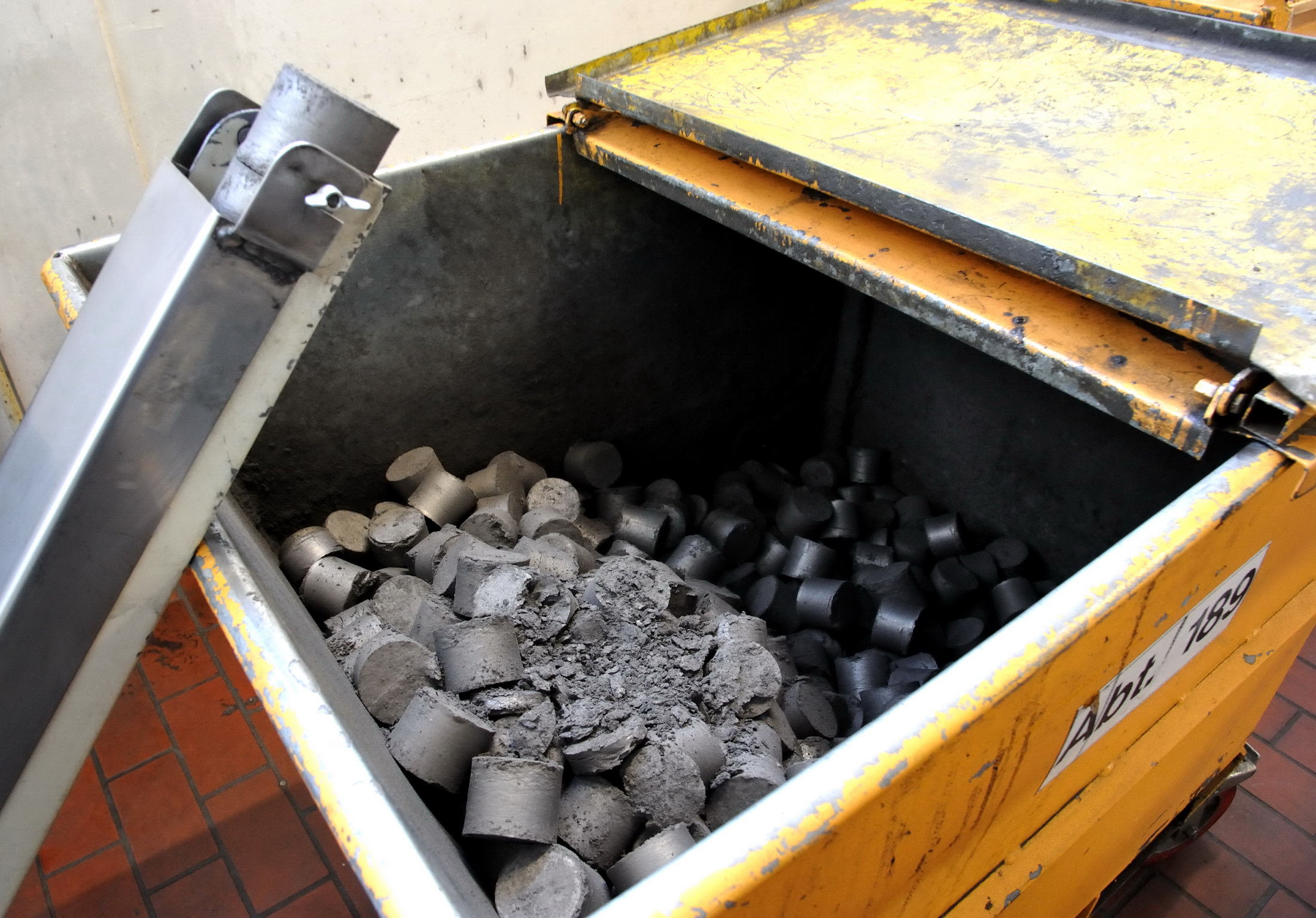