Precision turning parts expert, Lauble GmbH, have in the meantime two briquetting systems from RUF, which enormously simplify the management of the inherent chips. The company has saved a lot of space since they switched from centrifugation to pressing and simultaneously reduced the logistic expenditure.

Lauble GmbH in Dunningen has established itself with complex parts turned with absolute precision. The family led Company with 50 employees reliably supply their customers from mechanical engineering and other branches. Timo Auber, grandson of the Company's founder and one of four family members who make up the Company's management board, emphasises: " Meeting the extremely high requirements on precision and surface finish, demands a well thought-out manufacturing structure. This is why we optimise our processes continuously." The customers show their appreciation through decades of loyalty. However the non-direct value adding areas are also subject to these demanding standards of organisation; for example the management of the roughly 220 tons of chips, mainly steel chips, which are created during lathe work.

Lauble made a quantum leap in this regard when they commissioned the first of their briquetting presses from RUF, in 2006. The Company has dealt with their growth and the increasing requirements with a second, significantly more powerful RUF system, since 2018.

Volume reduction was the decisive factor

The enormous volume reduction was the decisive reason for us to commence briquetting," reports Timo Auber. Processes have been optimised and costs have been reduced through various effects, ever since. "We no longer have to provide space for large chip containers or turning space for trucks coming to pick up our chips." Furthermore the volume of forklift traffic has reduced significantly and the Company no longer requires a watertight basin, which served for storing the chips with cutting oil residue.

The original, smaller press, a RUF 5.5/3700/60x40, is equipped with a 5.5 kW electric motor which presses the chips hydraulically, at a pressure of up to 3700 kg/cm2, to briquettes pressed to a form of 60 x 40 mm. The length of the briquettes deviates in dependency on the properties of the respective chips. This system is still being used by Lauble to press residual aluminium. The RUF 15/4000/70, the more powerful of the two which is set up for higher throughput, presses the stainless and case hardening steel chips. Its electric motor boasts 15 kW, the pressing pressure reaches up to 4000 kg/cm2 and the briquettes are cylindrical with a diameter of 70mm, a length of about 90 mm and a weight of about 1.2 kg. Before pressing, the chips are chopped up by an upstream shredder, as particularly long and hard steel chips can only be briquetted optimally following such action. Other materials such as grinding sludge, cast iron or wood can also be pressed by the RUF systems easily and without pre-treatment requirements.

This compression allows Lauble to collect its residuals in handy, light, stackable steel boxes. Each of the boxes holds around 2 tons of briquettes. A three cubic meter container would be necessary to store the comparable underlying volume of chips. Thanks to this volume reduction of a factor of 1:3, the recycling companies are seen doing a pick up more rarely.

A further benefit: The chips, when pressed to briquettes, are practically dry. The pressing reduces the presence of residual cutting oil from originally between ten and fifteen per cent, down to three. The pressed out oil is collected directly from the machine. For cleaning purposes it first flows through a paper filter and is subsequently centrifuged and finally is deployed once again in the lathe centres.

RUF Regional Sales Manager, Jens Wöllenweber, explains additionally from his comprehensive experience: "Briquetted chips can be stored without hazard in the turning area and transported on the street. Cooling lubricants or oils are removed and thereby present no threat to the environment."

Briquetting proved to be the best value for money alternative

Before the acquisition of the first briquetting system, the Company removed the cutting oil from the chips using a centrifuge. This system had however become old and alternatives were called for in the year 2006: whether to invest in a new centrifuge or to purchase a briquetting press? In the end, the briquetting press was decided upon, because of the afore-mentioned benefits, in particular the simplified logistics. Additionally as Auber remembers, the RUF system was a better value alternative.

A further positive aspect for the management was that Lauble correctly collected the chips according to the respective materials whenever it brought a benefit regarding recycling and the achievable price. This applied to the roughly 20 tons of aluminium residues per year as well as the mainly used stainless steel grades and case hardening steels.

A changeover from one batch of material to another is simple on the RUF systems and incurs minimal losses. "During changeover you might get a maximum of five or six briquettes with mixed chips which can be reused later as steel mix," explains Auber. During centrifuging however, a lot of effort was expended doing cleaning between the changeovers.

Reliability is a must in every case for Lauble. You see the 24 lathe centres in the Company are producing from Monday morning to Saturday evening, round the clock; and not only parts are produced but chips as well. "If we didn't process the chips for four or five hours, production would come to a stop," is Timo Auber's statement. It is vital that such a scenario is avoided emphasises his uncle, Günther Lauble, who is also on the management board of the Company. He knows that he can rely on RUF and remembers: "Hans Ruf, founder of Ruf Maschinenbau, personally guided us through the Company 13 years ago and convinced us with his philosophy of setting up the machines for reliability and durability without any compromises. This has been proven correct to this day in our Company."

Timo Auber and Günther Lauble have never regretted the decision to invest in RUF. The upstream shredder is set up for the types of chips created at Lauble and therefore both systems can run without unplanned downtimes ever being an issue. The machine operator carries out cleaning and small maintenance works. When wear parts like the extrusion punch are approaching the end of their service life, this is noticeable because of small irregularities on the pressed briquettes. This means an exchange carried out by a Fitter from RUF can be planned, with sufficient notice to ensure no negative influence on production is possible.

Set intervals for exchanging the extrusion punch make no sense at Lauble because the wear rate is very dependent on the type of chips being pressed. When it comes to aluminium chips, service life of several years may be achieved. However particularly hard chips mean wear parts must be exchanged more regularly.

The RUF presses are set up for 24/7 unmanned operation. To achieve this objective merely requires the chip feed to be automated. However, Lauble did not take up this option, because the material batches are subject to regular change. This is dealt with best by a person being in charge of control and observation, according to Timo Auber: "These tasks are taken care of by one of our employees, who is responsible in parallel for the material store and the parts washing system." He hangs the container that is used to directly collect the chips from the lathe centres into a lifting device, which in turn tips the chips into the shredder. From here they are transported automatically to the hopper of the briquetting system. A sensor starts the press as soon as enough chips are on-hand and stops it again as soon as the material runs out.

Lauble has already secured 400 square meters for expansion to deal with further growth. The briquetting capacity should be covered for a while thanks to the new system from RUF. But one thing is clear for Timo Auber: When we need a third system, it will be a RUF, once again." 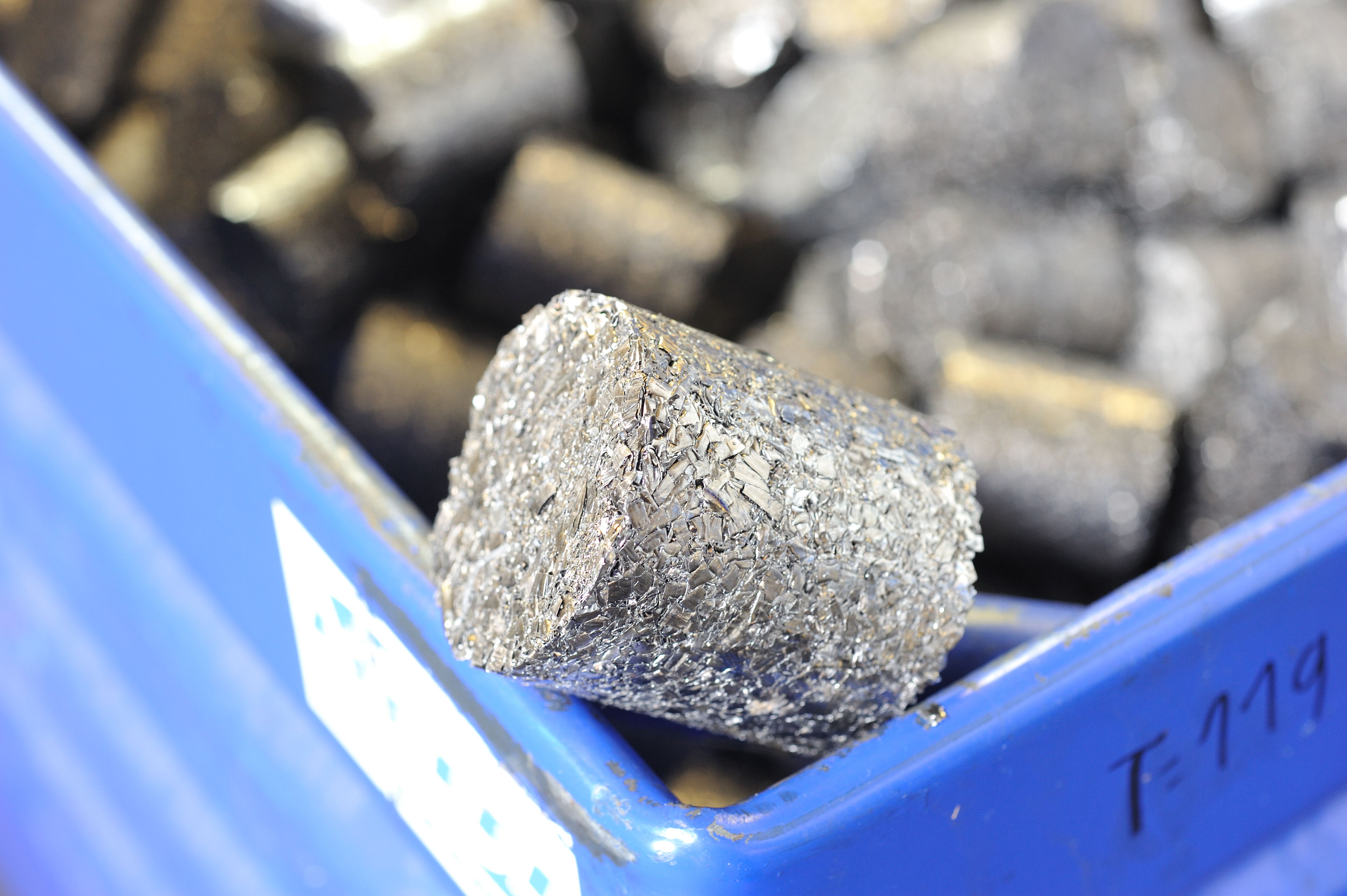 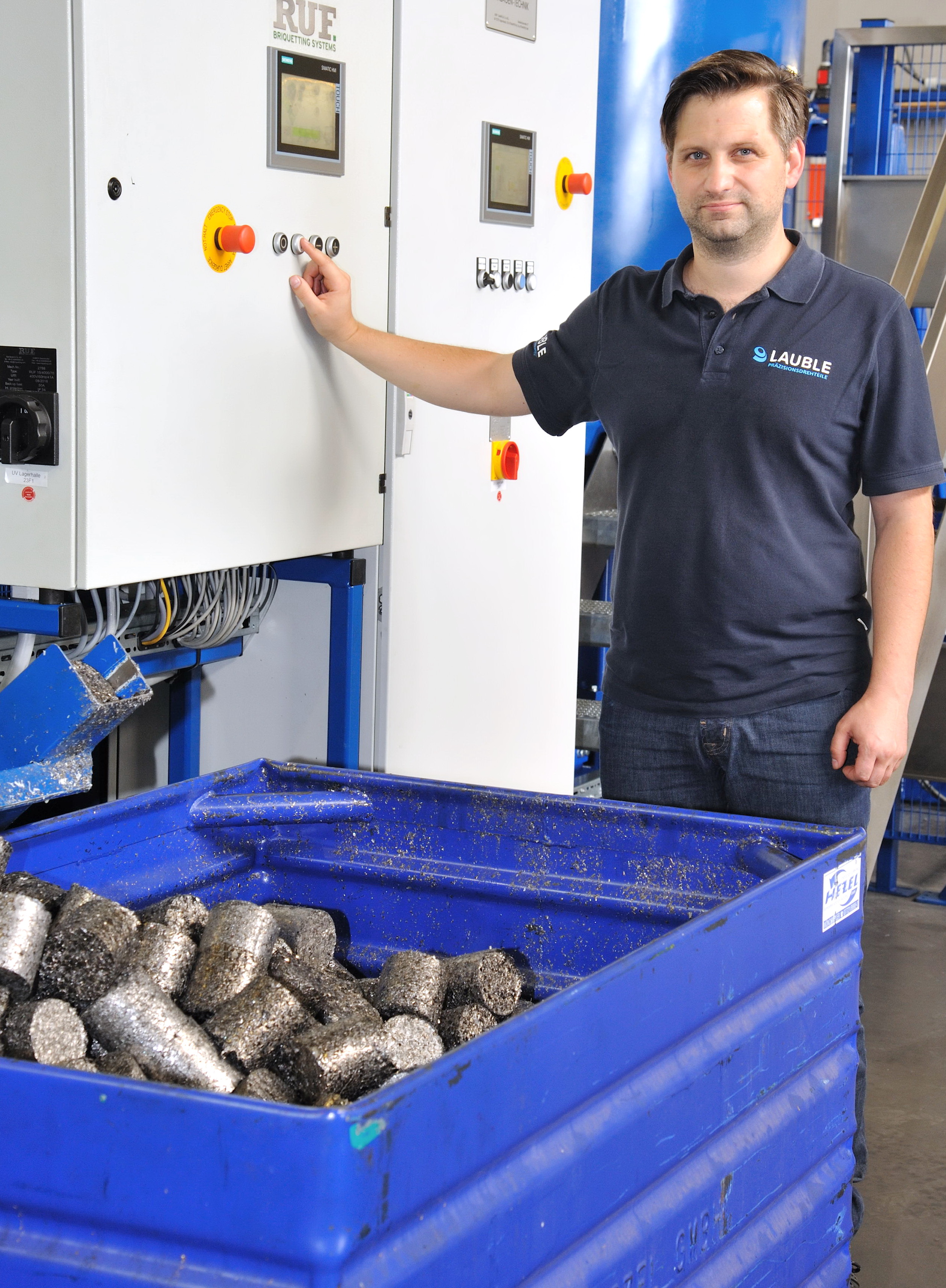 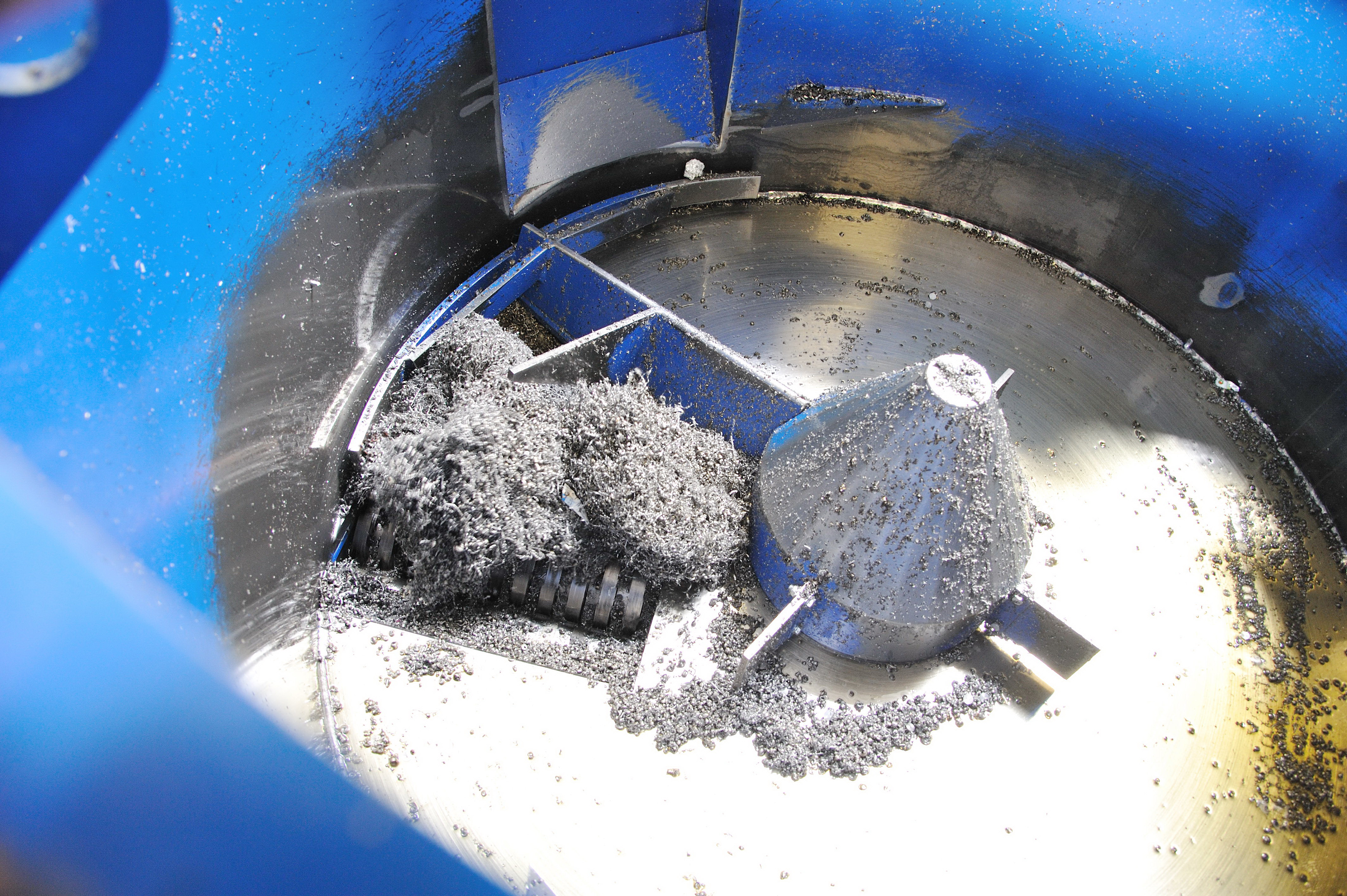 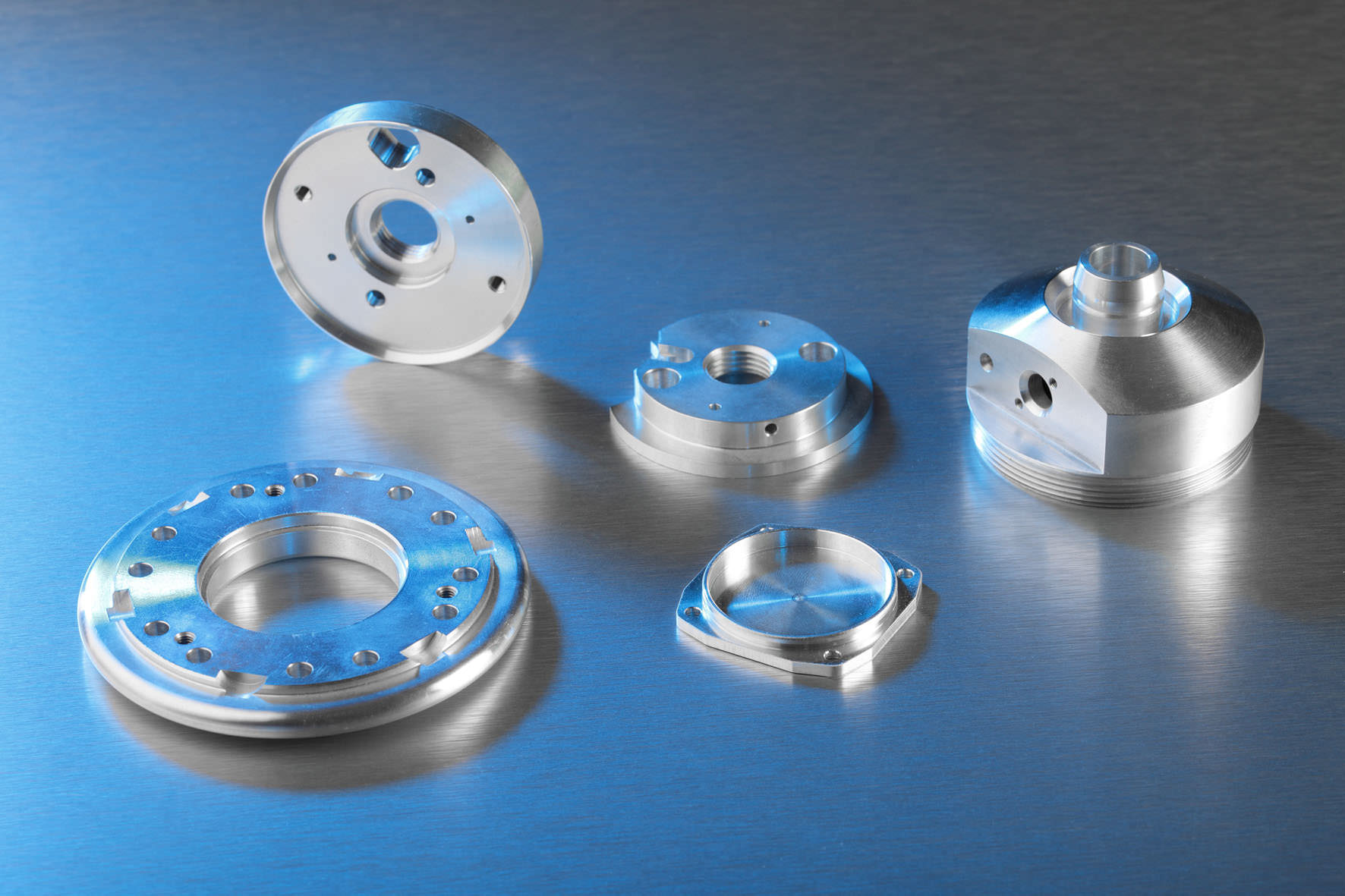